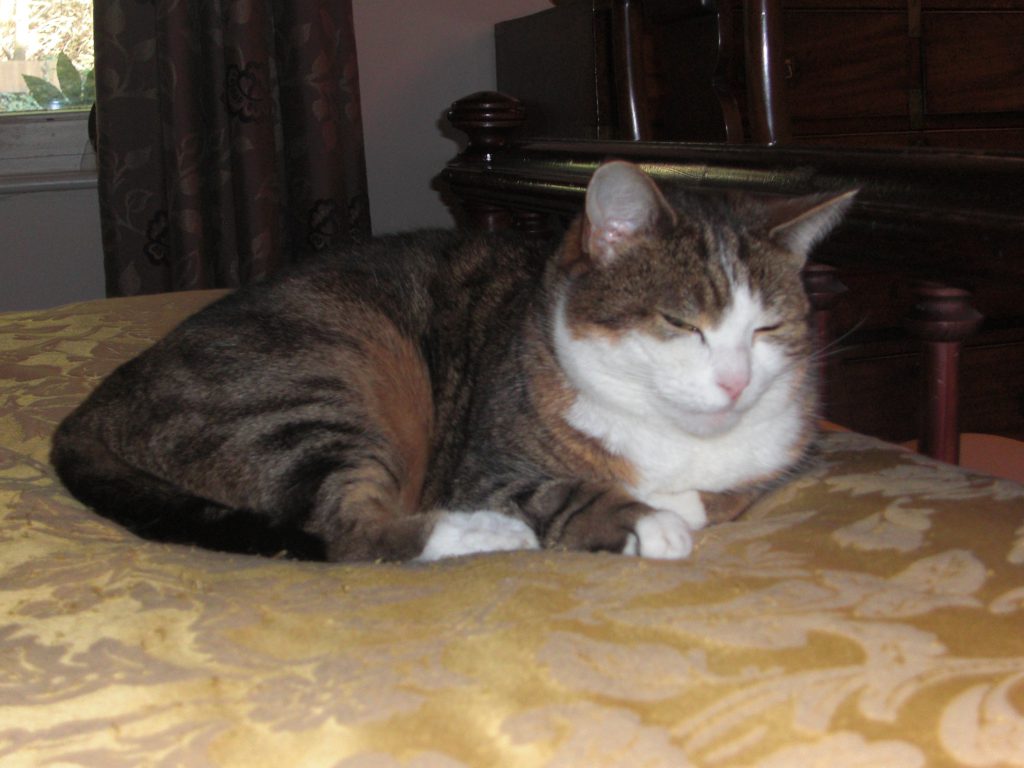 Maggie’s mother was half-feral. Bearing her kittens in a garden shed, she moved them all one night, and left Maggie behind, at three weeks old. The owner of the shed, hearing anguished mews, rescued the tiny kitten, and she was treated for fleas, ringworm and earmites. When she was passed on to us, we named her Maggie for the soother-sucking baby in ‘The Simpsons’, because of the strength with which she sucked the milk from the tiny dropper I was feeding her with.
She must have been the runt of the litter, but she had the strongest life-force I’ve ever come across. Her peculiarities included an oddly shaped pupil in one eye, badly developed knee joints and hip joints, and a spiky-tipped tail which had not been finished off properly. She developed arthritis very early on, and I was advised that her pain medication would cause kidney failure in about five years. Maggie cheerfully ignored this prediction, and it only recently began to come true. She was diagnosed with a brain tumour, in January 2016, but it was very slow-growing, and had not yet begun to affect her.
Although she could not run fast, climb trees, or fight with her back legs, she had a feisty way with the two next-door cats, howling threats through the window, and occasionally chasing them with a sudden well-timed rush. She never caught anything in her life, of course, but liked to chase little balls and catnip toys.
Maggie was notorious among my family and friends for her very grouchy temperament. She used to attack visitors, and nipped the ankles of my nephew and niece when they came to dinner. She had to be put in kennels if we went away for any length of time, because successive friends flatly refused to visit and feed her after one experience – she would express displeasure by vomiting, and ignore them completely. For shorter trips, we used MaowCare, and Alice is one of the few people she ever took to. I must also mention Mary and Marjory Dobbs, of Rathfarnham, in whose cattery she spent many contented weeks over the years, and Cliodhna Murphy, of Martinstown Cattery in Kildare, in whose care she spent her final days.
In her latter years, she mellowed a bit, and actually allowed people to scratch her head. She stopped hissing at the grandchildren, and nearly sat on a lap once. However, she was always my cat, and never really took to anyone else. I will miss her dearly.